I got tired of the American bubble. When I told people I was moving to Colombia, they would either mistake it for the well-known university of Columbia which I was always flattered by, or – understanding correctly – give me the ‘you-can’t-be-serious-white-girl’ face. It didn’t take me long to realize that the people who reacted in this way were those who had never actually been to the country of Colombia and/or the ones affected by the American bubble.

I’ll explain what I mean by this, but first I want to discuss why I chose Colombia.

I understand that it’s not common for most 24 year olds to relocate abroad post-graduation, but I had a purpose.

For those who have actually visited Medellin Colombia, you know what a diamond in the ruff it really is. 70 degree weather every day of the year. Low cost of living. Kind and welcoming locals. Buzzing hub for social innovators and entrepreneurs. And a growing bed for investment projects.

It’s certainly the place to invest in at the moment, and yet most people don’t know otherwise. It’s hard to believe at times that only 25 years ago it was the city with one of the highest homicide rates in the Western hemisphere. With the death of Pablo Escobar in 1993 and the building of the city’s metrocable in 2004 to connect the peripheries to the city’s center, the safety and security of the city increased dramatically, so much so that in 2014 it was named the most innovative city in the world.

So when I was given that ‘are you kidding?’ face when I told people that I was moving to Colombia, I’d nonchalantly bring up some of these major points. I’d focus on the city’s transformation from one of the most notoriously dangerous cities in the world into one of innovation, social transformation, and positive change.

The stigma surrounding Colombia has yet to be shed and the stereotypes have yet to be broken. But that is partly what I am setting out to do here in my culture blog.

To show the world the beautiful and amazing city of Medellin, the country of Colombia, and the entire region of Latin America at large.

Unfortunately, in the United States we live in a bubble, and until you leave, you won’t understand what I mean.

For being the biggest melting pot of all nations in the world, the United States, we can say is pretty unique. In New York City, you can find just about every nationality in the world. It is certainly an incredible and special thing when you can experience the whole world packed in the same city – feels like you got it all.

The access to diversity is outstanding, however, we need to realize that it’s all coming to us secondhand. Having lots of Dominican friends, practicing Spanish with them, and dancing bachata every weekend is not the same thing as actually visiting the Dominican Republic itself. Until we get out of the bubble and visit these other places where the language, dance, food, etc. came from we lack a deep understanding of it all. Our ideas and conceptions of a people and their culture can often be misconstrued. That’s not to say that we gain nothing by participating in cultural activities here in the U.S. – certainly not.

However, it’s not right to assume either that having access to diversity and a wide variety of cultural groups in the U.S. means that we don’t need to travel elsewhere to authentically experience them.

When we see the land itself, meet and speak with the locals, learn the history, and live the people’s experience we’re then able to form an educated opinion and fully understand and appreciate another culture, country, or people. This in turn can then serve for introspective reflection on how and what kind of impact that country, culture, or people have on your own. For me and my personal journey in Colombia, this move to Medellin is my opportunity to encounter the raw and authentic life of Latin America, to be fully immersed and to feel what it is to really LIVE, challenges and all.

So when someone says, ‘Omg I have nothing to wear!’ while standing in their walk-in closet or ‘I hate when my Uber driver doesn’t speak English!’ or even ‘I can’t believe they don’t have wifi.’ .. that’s the American bubble speaking.

I’ll be happy to leave it for a while.

View all posts by 13gibbsl 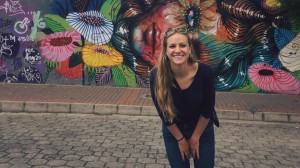 Hola amigos! Soy la Gringa Latina. ;) Latin America officially grabbed my heart, which is why I moved here and am now based in the one and only Medellin Colombia.
Moving to another country has not only broadened my American perspective but has also given meaning to the importance of la CULTURA and what makes us who we are! Latin culture has certainly taught me a lot and I now want to share with the world all that I’m living…
…through the eyes of la Gringa Latina!